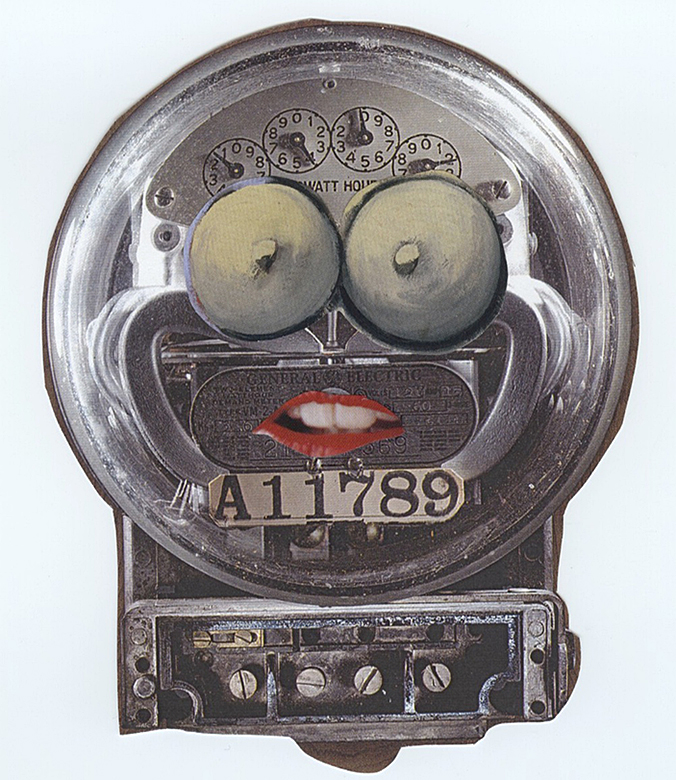 The Exquisite Corpse was the theme for last week’s collage class – Embellish An Image Play With Collage – at the Pelham Art Center.

What is the Exquisite Corpse?

It’s a multi-part poem or image.

The Exquisite Corpse was very popular in the early 20th century with Surrealist poets and visual artists.

Exquisite Corpse is a collective collage (a group project) with words or images. In France, it’s called Cadavre Exquis.

If the collage was poetry, each person wrote a phrase on a sheet of paper, folded the paper to conceal what they had written, and passed the paper to the next player to add a new phrase.

If the collage was visual art, each person drew on a sheet of paper, folded the paper to conceal their drawing, and passed the paper to the next player. No one was allowed to peek until the game was completed and the project was complete.

The image below is in 4 parts and from Tammy Christel’s Jackson Hole art blog (Abstract Art in Wyoming at the J.H. Muse Gallery).

An Exquisite Corpse image could be disconcerting – and it was meant to be. The Surrealists held the view that human nature is irrational fundamentally. Surrealist artists include Max Ernst, Salvador Dali, Joan Miro and Andre Masson.  Read more…

See the image below by Max Ernst (German, 1891-1976). Ernst titled his collage Santa Conversazione (1921) and assembled the collage with fragments  of images from encyclopedias, commercial catalogs and photographs. He included birds and a button. The juxtaposition of images and the title make the work confrontational and give it the Surrealist edge.

I brought the book ALL MIXED UP by Carin Berger to inspire the class. It’s a mix and match book.

The image below shows one layout page in the book with the words Robot Balances Playfully opposite illustrations. The author says the book allows you to create over 13,000 characters. I like the selection of words. I think they can jump-start the creative collage process.

I did my own sample collage called Robot Balances Playfully. See image below.

I had an image of machinery – a meter? It always knew it would become a face.

I played with the size of the original, scanned and reduced it so it would fit on the paper background (it’s the inside lining of a business envelope). I cut out a mouth from a Vogue Magazine model’s face. I cut out 2 eyes (actually they were breasts in a Picasso abstract painting reproduced in a recent issue of Art in America Magazine).

That became the top section – a Robot’s face.

I found an image of a seesaw online and added color to the black and white background.  I like the fact that it’s graphic. It became the middle section and represents the robot’s midsection – and the word Balances.

I found an image of clown’s shoes online and added them to papers for the bottom section. The clown’s shoes stand in for the word Playfully.

Finding images and cutting out images was time consuming (it takes a lot of time to find the right images). Many of the images were the wrong scale – too large.

I spoke with students about how to begin their collage and recommended placing background papers first to define the 3 separate segments. I thought it would help get organized.

I think it is much easier to begin a collage with background papers and then add images. They all wanted to work on the stark white substrate paper.

The 3 images below are collages in a series titled Trouble. Each is a variation on the preceding one, and each has one element in common – the torso (middle section) is the same.

I found background papers in art magazines. I found figures, faces, hands and shoes in fashion magazines. I found text everywhere. I resized images to get the right scale. I scanned composite images, printed them on good paper, and added more collage in smaller or larger scale.

The image above includes a grid of drawings in the background with the figure and text collaged over.

I am reading a book now titled Dada and Surrealism: A Very Short Introduction,  by David Hopkins (Oxford University Press). It’s an historic overview and a good read. The author says for many people Dada and Surrealism represent not so much movements in 20th-century art history but “modern art” incarnate – a defining modernist sensibility. Artists assembled new structures from bits of paper (Kurt Schwitters, 1887-1948) or from pre-existing objects (Marcel Duchamp, 1887-1968).

In 21st -century America, supersaturated with imagery and concept, Duchamp and the readymade aesthetic still rules.

2 thoughts on “COLLAGE ALL MIXED UP”