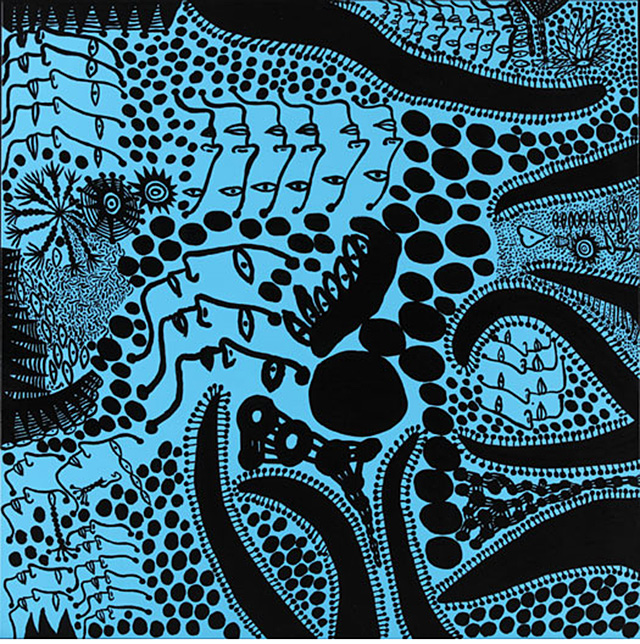 I walked into the last gallery at the Whitney Museum by mistake. I was there to see the Yayoi Kusama exhibition. So I saw the last works first – large flat acrylic polymer paintings in flourescent colors – instead of the early small, intimate collages.

Yayoi Kusama is well known for her use of dense patterns of polka dots and nets. She is known for her work in various media, including painting, drawing, sculpture, film, performance and immersive installation. The image above, seen at the Whitney Museum of American Art, is synthetic polymer on canvas, 51×52 inches. Image, courtesy the Internet.

I have never seen Yayoi Kusama’s works before. She was born in Japan in 1929 and came to the United States in 1957. She quickly became involved in avant-garde “happenings” and rose to prominence in the art world. She is considered a precursor of the pop art, minimalist and feminist art movements and influenced contemporary artists like Andy Warhol and Claes Oldenburg. Read about her life and work…

Many of her early works were installation, performance, and ephemeral. Many disappeared.

She left the United States and returned to Japan in the early 1970s. Kusama is now acknowledged as one of the most important artists alive in Japan today.

My first impression of the dense painting installation was: Too many. Too busy. Too close – OVERLOAD.

The image above, titled Late Night Chat is Filled with Dreams, was in the first gallery I entered with all the recent paintings. It’s synthetic polymer on canvas, 64×64 inches and was completed in 2009. Image courtesy the Internet. The artist said she would like to finish 2000 paintings before she dies. This painting was about number 196.

The image above, titled Mirror Room-Pumpkin is an installation Kusama completed in 1991. It is made with mirrors wood and paint to create a dizzying effect. Kusama wanted the dots to appear to go on and on into infinity. The room is orange, like a pumpkin. It’s 69x69x69 inches. The work is now part of the permanent collection of the Hara Museum in Tokyo, Japan.

Kusama was the featured artist for the Japanese Pavilion at the 1993 Venice Bienniale. She produced a mirror room filled with pumpkin sculptures.

I walked through the galleries and saw a variety of different media, including an exploding chair sculpture (see below). The sculpture communicated a visceral, phallic, raw energy. It was soft and also sly. I liked it. It made me uneasy. It made me think of soft sculptures by Louise Bourgeois. Naughty.

Continuing through the galleries, I saw psychedelic dotty installations. Kusama’s work is about dots.

The image above is titled Air Mail Stickers (1962). It’s a large collage on canvas, 71×67 inches, in the collection of the Whitney Museum of American Art. The entire surface of the canvas is covered with hundreds of air mail stickers. Kusama had to lick each sticker to get it to stick to the canvas. When the collage was created, stamps were not self-adhesive like today. This work is included in the current exhibition. Photo courtesy the Internet.

I didn’t get to see the installation Fireflies on the Water on the first level at the Whitney Museum (I was too late to get a ticket into the space). Fireflies (owned by the Whitney and included in the 2004 Whitney Biennial) uses water and mirrors to reflect 150 tiny hanging lights. Only one person is admitted into the installation at a time.

The exhibition will continue through September 30, 2012.

HOW DOES COLLAGE EXPLODE?

I titled this blog Collage Exploded. That was a reaction I had when I saw the exhibition.

Collage is about putting lots of things together and that’s the experience I got when I walked though the galleries. The exhibition was a collage. Probably because the artist worked in so many different media and everything is included.