I submitted two diptych paintings for a juried exhibition titled Duality: Glimpses of the Other Side at to the Islip Art Museum. One diptych – titled Blue Triangle Diptych (nearby) was accepted. One diptych, titled Blue and White Triangles (below) was rejected. The juror was Scott Bluedorn, an artist who lives and works in East Hampton, NY. The exhibition is June 24-September 17, 2017. The reception date is June 24th from 8-11. The Islip Art Museum is located at 50 Irish Lane, East Islip, NY 11730 on Long Island. Gallery hours are Th/F 10-4 and S/S 12-4.

I don’t typically submit works for juried shows but was intrigued with the theme and the wording in the prospectus. It asked artists to “seek out what’s hidden behind the veil of perception to reveal chaos in the mundane, beauty in the ordinary, and depravity in the wholesome.” I don’t see how my work is veiled, depraved or chaotic, but I suppose my approach to layering with paint and papers implies veiled perception – something below the surface. I am interested in duality. The diptych is my approach to expressing duality. I work with painted papers and collage. The media is dual. In the first diptych, one panel has painted paper collage and one panel is a painting in acrylic. Each includes triangles but the configuration is not parallel. Each panel is 24×16 inches. Together, the diptych measures 24×32 inches. I like the interplay between mixed media – collage and painting, paper and paint. The Blue Triangles Diptych was never intended as a diptych. Each panel was created to stand alone. By chance, I placed them next to each other against a wall in my studio (I was re-organizing space). I liked what I saw and I decided they belonged together – it was serendipity! I think of them as fraternal twins.

The image nearby is my 2nd diptych titled Blue and White Triangle Diptych. This work was declined. It was created as a diptych. I changed triangle shapes and added more light blue and white papers as I worked. Notice the way the triangles go from wider to thinner as they approach the center and press into each other’s space. I wonder if this work was declined because the two parts are united. What do you think? I hope you can attend the reception and/or see the exhibition if you find yourself in the area. Link here for more information and directions. The Islip Art Museum website says the IAM is a leading exhibition space for contemporary art on Long Island, and the NY Times calls the Museum the “best facility of its kind outside Manhattan.” 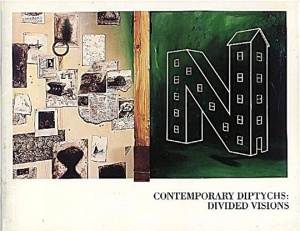 I have a skinny, 16-page paperback catalog titled Contemporary Diptychs: Divided Visions. See it nearby. It’s an old catalog from a 1987 exhibition. I found it while browsing for art books at the Strand Book Store (828 Broadway and 12th Street in NYC). I loved the cover image and the essays about diptychs inside. If you haven’t been there, you must visit the Strand. It’s a great destination for art book lovers.  The catalog cover image shows a contemporary diptych titled Slope of Repose, by the artist Edward Henderson, dated 1986. The catalog has the same title as the exhibition – Contemporary Diptychs, Divided Visions, – and includes essays written by Roni Feinstein, formerly Branch Director of the Whitney Museum of American Art, Fairfield, CT. Feinstein organized the exhibition at two Whitney Museum branch locations – one at the Equitable Center in Manhattan, 787 Seventh Ave., NYC and another at at the Whitney Museum branch in Fairfield County, Stamford, CT. Both shows were in 1987. The exhibition catalog is still available online.

According to Feinstein, the first diptychs were tablets consisting of two pieces of wood with writing hinged together. In the late 16th century, diptychs were used primarily for companion paintings with portraits of a husband and wife, intended as a pair, but also visually independent. The contemporary revival of diptychs in the 1960s was more about conceptual art – dealing with issues of narrative and allegory, autobiography and self-expression, social, political and cultural commentary.

The essay about Edward Henderson’s diptych Slope of Repose (image is seen above) says: “Things are not exactly as they seem. The left side may look like a collage with pasted newspapers and other elements, but it’s a trompe l’oeil painting. What looks like a wooden bar running down the middle is actually painted to look like it’s real, and the right side panel shows a letter N (an apartment house) but is assembled from thin strips of balsa wood. What seems to be collage on the left side is painted and what seems to be painted on the right side is collage.” The diptych makes you ask – what is real?

I am pleased to be included in the exhibition Duality: Glimpses of the Other Side at the Islip Museum, and can’t wait to see the various works that were accepted in this annual show. Long Island is a lovely place for a day trip in the summer. If you are nearby, please stop by and see the exhibition. Let me know what you think. See directions to IAM here. Let me know what you think about contemporary diptychs and the idea of duality.

6 thoughts on “Duality at the Islip Art Museum”