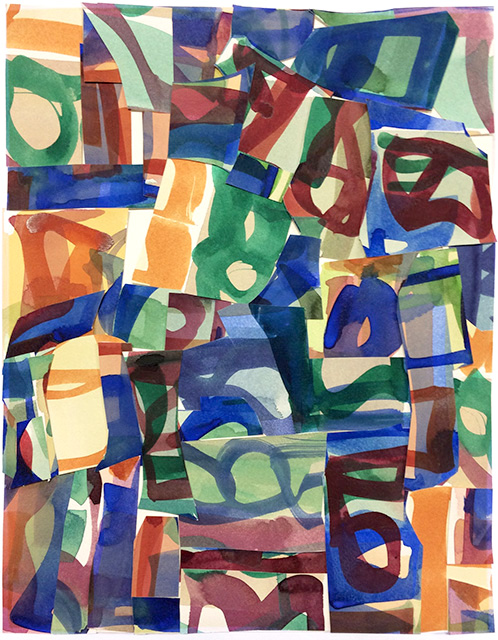 Melissa Meyer is called a lyrical abstractionist. She paints free-floating, painterly ribbons of vibrant colors and shapes with oil paint thinned to the transparency of watercolor. She draws with paint.

The image above, titled Summer in the City I, is oil on canvas (2018), 80 x 60 inches (image courtesy Lennon, Weinberg, Inc.).  It’s a grid with calligraphic glyphs drawn with a paintbrush with thinned oil paint in different colors. Notice there are patches of palest, almost transparent pink and yellow below the painted glyphs.

The image above is titled Draw the Line (2015) oil on canvas, 72×96 inches (image courtesy Lennon, Weinstein, Inc.). Here, the background is a patchwork of warm and cool whites with a second layer of warm and cool blacks painted in a calligraphic design.

John Yau, who wrote a review for Hyperallergic, is a big fan, and has reviewed many of Meyer’s solo exhibitions at Lennon, Weinberg, Inc.  He said: “When Meyer started using oil paint that was closer in consistency to watercolor, she broke through into a territory that is now all her own.” See his review (November 25, 2018) at hyperallergic.com.

In his exhibition review (November 25, 2018), Yau said he counted at least three layers of marks compressed together in Trellis Too, saying the first layer is a patchwork of palest colors (durian yellow, cantaloupe orange and watery blue), the second layer includes glyph-like brushstrokes in different colors where the brush can be dry or full, the color can be saturated or faded, and one glyph often slides over another. The third layer is a drawing in black with a geometric web of tangled lines that hold the first two layers together. In his review, Yau writes he likes the way the painting asked him to pay attention to how the glyphs drift across the surface, as well as within the layers, how the paintings merge division and unity without favoring either because you notice similarities, changes and ruptures.

I was lucky to have a conversation with Jill Weinberg Adams, the gallery director, and told her I am writing about women who do collage. She told me Meyer has a long-standing interest in collage and a unique collage esthetic. I was intrigued.

Meyer makes a connection between her approach to painting and the collage process of cutting, pasting, and arranging elements, and says she isolates elements while building the whole painting, and wants viewers to experience each part of a painting as dynamically as they experience its entirety.

The image above shows 3 sketchbooks with wide format, open double-page spreads on which Meyer added watercolors and transfer prints. I learned Meyer is often at residencies and, while there, creates “Residency Sketchbooks.”  The Metropolitan Museum of Art in New York reproduced one of Meyer’s sketchbooks.

At positjoiurnal.com I read Melisssa Meyer is very aware of the importance of collage in forming contemporary aesthetics, saying “As a method, collage encourages layering, shape-making and juxtaposition, all of which I apply to my work, from my paintings to multi-panel public works using expanded media (Photoshop).

View a carousel of more watercolor collages in the Rearrangement Series at positjournal.com.

I found the image above online. It’s dated 2016 and was included in a group exhibition in Spain.  Notice the cut paper collage on top where the paper shapes mimic the shapes of the calligraphic line.

Picasso and Braque did not invent collage. Many women made collage before the men did – but the men got the credit.

In her mid-twenties, Meyer and fellow artist Miriam Schapiro co-authored an influential essay that linked the history of collage to traditional female hobbies like quilting and scrapbooking. They titled their essay “Waste Not Want Not: An Inquiry into What Women Saved and Assembled-FEMMAGE.” The essay was published in the magazine Heresies: Women’s Traditional Arts: The Politics of Aesthetics (Winter 1978).

Meyer said she was always interested in scrapbooks made primarily by women in the 18th century. She discovered a collage sensibility in quilts. She valued the works of mid -20thcentury abstractionists, including Lee Krasner, who reused paintings and works on paper and recycled them into her large collages on canvas.

See a facsimile of Femmage from the original Heresies publication at artcritical.com.

The image above is a collage by Miriam Schapiro, titled Miriam’s Life With Dolls (2006), fabric and collage on paper, 30×60 inches (image courtesy Flomenhaft Gallery, 547 W 27 Street, NY, NY). Schapiro (1923-2015) was a Canadian-born artist based in the U.S, an activist and pioneer of feminist art. Schapiro worked to resurrect the reputations of women artists who had been forgotten or dismissed by art historians. She was a painter, sculptor, printmaker, and a leader of the Pattern and Decoration art movement. Read more at the artstory.org.

The image above is titled The Green Woman, 1973, acrylic on paper with collage, 34 x 25 1/2 inches, published in Ms. Magazine (1973) and now in the permanent collection at the International Collage Center.

Meyer received a commission to create two large murals for the Shiodome City Center in Tokyo, Japan (completed in 2003). One mural was forty feet high; the other was sixty feet long. She worked with computer technicians with Photoshop to create the macquettes for the murals, directing how image files were scanned, how glyph images were layered, how colors were made saturated or muted, and how her  painted calligraphic lines were made more or less transparent.

Meyer admitted the scale of the murals posed a unique challenge. She knew she  would have to radically enlarge the scale of her brushstrokes as she painted, and make each calligraphic shape more independent. She said the most basic challenge was to make the images work for viewers from all different vantage points. The commission got Meyer thinking about how her brushstrokes would move across the surface in the super-sized murals.

She said working with Photoshop renewed her engagement with collage and profoundly affected her sense of space and her attraction to the esthetic idea of radical discontinuity.

THE CHOREOGRAPHY OF BRUSHWORK

The image above shows a view into Meyer’s studio with her paints, brushes and books. Meyer says “ when I’m painting, I work intuitively, physically, thinking about brushwork as a kind of choreography, a dance that happens in the wrists and arms as well as the whole body.

Meyer has exhibited in over forty solo shows, and has been included in group shows at the National Academy Museum and the Jewish Museum in New York.  In 1997, the Metropolitan Museum of Art in NY published a facsimile edition of her sketchbooks.

Meyer was awarded a Rome Prize from the American Academy in Rome and has received grants from the National Endowment for the Arts and the Pollock Krasner Foundation.  Meyer’s work is included in the collection of the Metropolitan Museum of Art, the Museum of Modern Art, the Brooklyn Museum, the Solomon R. Guggenheim Museum, the Jewish Museum and many other public and private collections across the United States.

Meyer has taught at the Rhode Island School of Design (RISD), the Art Institute of Chicago, and the School of Visual Arts in New York. She has completed public commissions in New York, Tokyo, and Shanghai, and currently has an eight by fourteen-foot ceramic mural in fabrication for the new U.S. embassy in Bishkek, Kyrgystan.

I am so pleased to write this post about an artist who has a collage esthetic and welcome your comments.