I write about modern and contemporary artists – mostly those who work with collage media and artists who create art with a collage aesthetic. This post has a new focus and asked 3 artists to comment on the relationship they have with their studio.

I asked 5 questions: (1) How do you feel about your studio? (2) Do you believe you have a relationship with it? (3) How long have you had your studio? (4) Did you change the space since you’ve had it? (5) Does the way the space is configured influence your practice? I’ve included studio images, and images for 3 artist’s whose studios, life and works inspire me (Louise Bourgeois, Lee Krasner and Alexander Calder).

Mia DeBethune is an artist, writer and licensed creative arts therapist who provides experiential psychotherapy through, art, art journaling, and weaving workshops to individuals and groups in her studio, located in Hastings on Hudson, NY.  She writes: “Often the most difficult feelings are too hard to express with words. In the art process feelings can be seen visually and felt tangibly through the creation of artwork.” Mia’s studio practice includes oil, pastel and encaustic painting, weaving in paper, plastic and natural fibers, to earthworks that engage the landscape. Read more here.

I know Mia because we are both members of the Upstream Gallery, an artist’s collective in Hastings on Hudson, NY. The image above shows a view of Mia’s studio with woven collage on the far wall.

The image above shows Mia’s loom in her studio. She writes: “I have walls fitted out with wallboard especially designed for tacking up drawing paper or canvas.  I have several large tables and area to spread out.   My work varies from collage to drawing to sculptural work with fibers. I also have a floor loom and a trampoline and physio ball for clients, but I use them when I get antsy and need to think through a visual problem. I like to put up a potential canvas or image and leave it on the wall for a long time, imaging what it might become.   Mental visual planning.   I have bins and bins of old paper and scraps of metal; an encaustic heat pan and loads and loads of yarn and fiber.  Sometimes I just put on the music and dance.   I haven’t painted in years except for small acrylics, but still love pastel drawing more than anything because it’s like drawing with pigment.  My latest obsession is with dying my own fabrics with things I find in the woods like black walnut and pokeberries.  I have 10 self-dyed canvases on the walls waiting to be painted on right now.”

Barbara Rachko is a contemporary artist and author best know for her pastel-on-sandpaper paintings. Her works are inspired by her large collection of folk art from Mexican and Guatemala. She writes a robust blog Barbara Rachko’s Colored Dust. Read more about her work at her website. I contacted Barbara because I’ve read her posts about her life and her work, and wanted to include her comments here. I know Barbara because we are both members of the NY Artist’s Circle.

Barbara says she is on her third, and probably last studio, saying: I’ve been here since 1997.

The image above shows Barbara Rachko in her studio. Photo: Elliott Jones. She wrote: “My first studio, in the late 1980s was in a spare bedroom in my house in Alexandria, VA, while I was on active duty in the Navy. In the early 1990s I rented a studio on the 3rdfloor at the Torpedo Factory in Alexandria. I enjoyed it for a while but the constant interruptions in an art center that is open to the public became tiresome – people were able to walk into artist’s studios, watch the artist at work, and occasionally buy a piece of art.  In 1997 I moved to NYC and was able to work solitary hours in peace without interruptions.”

She writes her studio is now located on West 29th Street in Chelsea, and continues to be an oasis in a chaotic city, a place to make art, to read, and to think. She adds: “I love to walk in the door every morning and always feel more calm the moment I arrive. My studio is my absolute favorite place in New York!” The image below shows another view of her studio.

Barbara says: “I love being in my studio and even after all these years, still find the whole process of making a pastel painting completely engaging. I try to push my pastel techniques further every time I work in the studio.

There’s one more thing about my studio: I consider it my best creation because it’s a physical environment that anyone can walk into and occupy, as compared to my artworks, which are 2D paintings hanging flat on a wall.  It has taken 23 years to get my studio the way it is now.  (I have never, nor could I ever, work on a pastel painting for 23 years!)  My studio is probably the best reflection of my growth as an artist.  It changed as I have changed over the decades.” 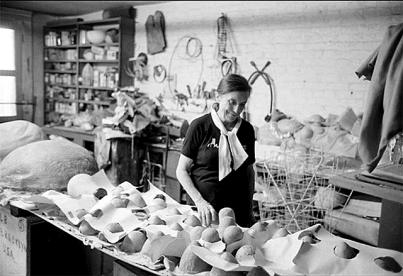 The image above shows a studio view with Louise Bourgeois (French-American 1911-2010). Bourgeois welcomed young emerging artists to visit her NYC studio – always generous with her time and comments.

I wrote a post about Bourgeois in the context of the color blue. She said that blue was her color – that it transported her into a world of freedom. Freedom was her reputation. Louise Bourgeois said and did exactly what she liked. Read the post here:

Christina Saj is a contemporary artist who creates brightly colored, richly patterned paintings that incorporate forms assimilated from ancient traditions. Her early training includes study with a Byzantine Iconographer, Petro Cholodny, the Younger. Her paintings show she is fascinated with geometric abstraction as well as show an awareness of historical context. Read more.

I know Christina for many years She is a friend and the person who designs my web sites. I knew her comments would be on target. The image below shows jars that contain liquid enamel on a shelf in her studio. It’s not paint. It’s part of her enameling set up for works on copper or steel.

This is what Christina wrote:

“The Artist’s Studio is such a romantic notion, one loaded with power and mystique. It’s the place where we conjur energy, muses and skills that surpasses our wildest dreams. But in truth, an artist’s studio is simply a dedicated space, a place you can leave and come back to and not have to clear your progress, but rather you can stop and pick up at will and for long or short stints as necessary. It’s the place where on the good days the magic happens, time stops and you can be free with ideas, you can test, push, pull, grow and be uninhibited. On the hard days, it provides refuge to write, think and just be with the work to think it through.” The image below shows Christina at work in her studio.

Christina adds: “Honestly, I believe we can make art anywhere. Over a 25-year career I’ve spilled out of rooms, onto porches and anterooms expanding and contracting as circumstances require, so I suggest this from personal experience. By the time I was an adult, i made having a space a priority. But I realized quickly that it just had to be a place where you have permission to work uninterrupted. We all somehow imagine that pristine, perfect space with north light, high ceilings white walls and convenient locations. But the reality is it doesn’t have to be the ideal space, it must just be one free enough to unencumber you from life’s distractions and responsibilities to allow you to be fully engaged in the task at hand.  Every space, no matter its dimension or character is not without compromise. A studio’s purpose is to serve and legitimize the act of creation itself and empower it with intention. It’s physical attributes aren’t the source of it’s power. What matters is that you have a designated space to allow the dialogue to begin, because for many of us it’s a lifelong conversation. It can start with a table top, and as your need grows it will. Artists make their work out of necessity, it’s just how they embrace the world. If the need is there – they will find a way. My truth is that my studio has almost never been “perfect”, but I’ve always had room to do creative work.”

The image below is a photo with 2 views of Alexander Calder’s huge studio.

The image below is a photo of Lee Krasner working in the barn at Springs (NY). It was Jackson Pollock’s space, but after his death, Krasner moved from the tiny studio in the house into the big space in the barn on the property, and her work took off.

Jerry Saltz, in his new book How To Be An Artist, has a chapter (p. 35) titled Use Your Studio (even if it’s just a dining room table you clear off at night). He says “think about the postcards, personal objects, other artworks you display because the décor in your studio will “bleed into your imagination.” I recommend the book – absolutely.

Having a studio is a priority for me. I’ve had different studios over the years, working at home and working in a rented space. I’ve always allowed myself the luxury of having a studio as a separate place to do work. I once had a studio in a garage behind my Victorian farmhouse. It had 1 ½ story high ceilings on the 2nd level. I worked there for 5 years, added heat and cooling units and lights. There was a WC that was part of the 20’ x 20’ space so it didn’t seem too big. My current studio is about 440 square feet, but the tall ceilings make it seem much larger. There’s a single tall window that lets in good light, the old floors are forgiving, there’s a slop sink, worktables, shelves for books, cupboards for storage, and a full-bed press for printmaking. Many of my collages start as prints. I don’t like to work in a space that’s too clean or too new: just clean enough and new enough. What I have at Media Loft makes me happy. The image above shows a view of my space at Media Loft.

Thank you for reading. Your comments are welcome.

6 thoughts on “Artists and Their Relationship to Their Studio”