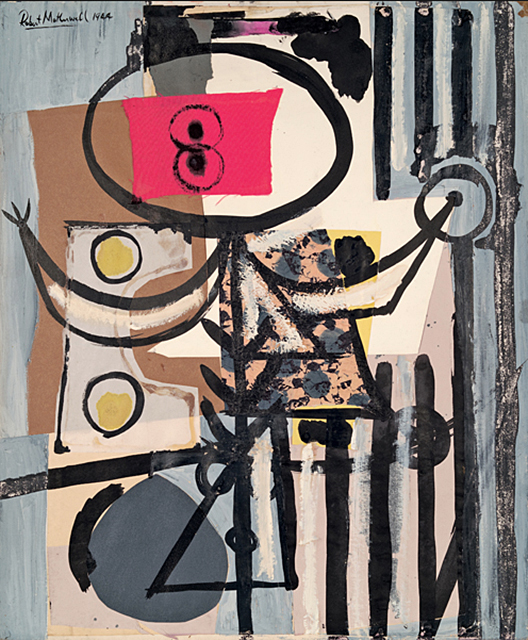 My favorite work by Robert Motherwell is titled Pancho Villa Dead and Alive (1943).

I love the work for the color, texture, painterly surface, the look of the layered papers, and Motherwell’s exuberant approach to his collage practice.  It is mixed media to the max. It looks so contemporary.

What a treat to see this and other works by this artist when I entered the Thannheiser Galleries at the Guggenheim Museum  (through January 5, 2014) at 1071 Fifth Avenue at 89th Street, NY.

I did not expect to see so many – 50 plus collages and related drawings in ink and paint from the period 1943-1951. I did not know Motherwell created that many works in collage media.  Every work is large in scale (especially for collage and drawing).

Pancho Villa Dead and Alive was created with cut and pasted papers, ink and wood veneer on paper board (28 x 35 7/8 inches). Some papers are printed and embellished with more paint. The paints include oil and gouache (opaque watercolors).

Motherwell layered painted papers in the same color family (see the light blue section in the lower center part of the collage). Notice the paint drips.

Motherwell painted his papers in his favorite colors: black and white, ocher and pale blue.

He used flat light blue paint and faded pink paint for his background and some of the overpainted papers.

He painted red and black splotches and (faded) red and blue drips behind the child-like stick figures that imply two bodies (dead and alive) riddled with bullet holes.

Motherwell liked to work with fine-art drawing papers for their matte appearance and subtle color variations. He liked commercial coated papers, especially in bright colors, because they reminded him of the colors he saw in Mexico (during a 6 month stay with artist Roberto Matta).

View from a High Tower (above) was completed in 1944-45. It is 29 x 29 inches, tempera, oil, ink, pastel and pasted wood veneer, drawing paper, Japanese paper and printed map on paperboard (private collection).

Jeffrey Warda’s essay (page 56) mentions that all the commercial papers Motherwell used faded and the strong pink is now a pale flesh tone.

Cotter’s final paragraph asks slyly if Motherwell relinquished his role as sole creator of his work (a defining feature of Abstract Expressionism) because gravity, chemistry and light deserve equal billing as collaborators since the works have changed color, texture and form. My comment: Change is good.

I love how Motherwell painted over his media, used patterned papers, painted onto the papers, painted out papers, added lines, dots, drips and splotches. The surface is dense and yet there is incredible freedom in the process, and so much energy in the execution. I love how he tore off layers of papers to expose raw paper surfaces below, and contrasted hard-edge cut papers with soft-edge torn papers.

Motherwell was an explorer – adventurous and exuberant in his practice. Everything in the exhibition looks cutting-edge and even edgy. That is why this show is so important.

Motherwell was a scholar and a founder member (who wrote about) the Abstract Expressionist movement of the 1940s – also known as the New York School – and (no surprise!) Motherwell’s collages are filled with the gestural energy prerequisite for Ab-Ex painters.

The image above is titled 9th Street Exhibition (1951). It is pasted papers with gouache and ink on paper, Mildred Lane Kemper Art Museum, Washington University in St. Louis, Donazione/Gift of Mr. and Mrs. Joseph L. Tucker, 1963.

Read an excellent overview of Motherwell’s life and career (with images and links) at Wikipedia.

Also see the the humorous (and informed) post  about the Motherwell/Guggenheim exhibition (11/13/13) by Ariel at Collage Volupte called How Robert Motherwell Lost His Dada Cred – its about Motherwell’s connection to Dadaism and Surrealism.

At the end of the post, Ariel writes about an old parlor game called Exquisite Corpse – played by Dadaist poets and visual artists in Europe in the period between World War I and World War II.

Motherwell was fascinated with dada, Surrealism, and automatic drawing.

FYI: Roberto Matta introduced Motherwell to a version of the exquisite corpse game at his NY salon. Motherwell attended the salons regularly in the early 1940s. Read more about the history of the Exquisite Corpse.

FYI: As a game, the exquisite corpse can be played by poets or visual artists. Players add words or images (drawings or collages) in turn. The first player writes or draws, folds the paper and passes it on to the next player. The final image or poem is supposed to be a surprise. Usually there are three or four players but, depending on how the paper is folded, the number can be more or fewer players.

FYI: Pancho Villa is an historic Mexican Revolutionary general, celebrated for his extraordinary feats in battles in the Mexican War for Independence. He was never defeated. He was assassinated in 1923 when he tried to run for political office in Mexico. Many streets throughout Mexico are named for him.

WILL YOU BE IN NEW YORK FOR CHRISTMAS?

Try to see Robert Motherwell: Early Collages at the Guggenheim Museum, 1071 Fifth Avenue at 89 Street before it closes January 5, 2014.

The exhibition catalog is excellent for the essays, but not for the images. You have to see the works in person. I can remember how bold and colorful the works are. I saw them. I will remember. The catalog colors and resolution is disappointing (it may be because the catalog was relatively inexpensive). The Motherwell exhibition archive and the number of images may change. Best to get to the Museum and see the works in person. If you are a collage artist and if you love collage, you must see this show.

Who you know and how you build relationships with the right people is critically important. It also helps to be a brilliant artist in the right place at the right time.

Robert Motherwell (1915-1991) was an intellectual who wanted to be a painter.

Meyer Schapiro introduced Motherwell to European emigree artists in NY, including Andre Masson, Marcel Duchamp and Max Ernst. It was helpful that Motherwell was fluent in French, had studied literature and philosophy, and had been to Paris.

Motherwell became good friends with Chilean Surrealist artist Roberto Matta who introduced Motherwell to automatic drawing and Surrealism (which influenced Motherwelll’s artistic practice for the remainder of his life).

Matta also introduced Motherwell to Peggy Guggenheim who invited him (with William Baziotes and Jackson Pollock) to create collages for her upcoming collage exhibition at her gallery Art of This Century in New York.

According to Peter Plagens’s Wall Street Journal review (Robert Motherwell and the Exuberance of Invention, Wall Street Journal, Dec 5, 2013), Peggy Guggenheim wanted to juxtapose the work of pioneering European modernists with younger American artists just beginning to push into Abstract Expressionism. She asked the Americans to create collage for the Art of this Century show.

How could the young artists say no – they had to create the work – they wanted to be included in a show with European masters like Jean Arp, Georges Braque, Juan Gris, Joan Miro and Pablo Picasso.

Motherwell’s collages were a huge success in the Art of this Century show. Peggy Guggenheim organized a solo collage show for Motherwell the following year.

Pancho Villa Dead and Alive was in the second show and immediately purchased and is now in the collection of the Museum of Modern Art NY.